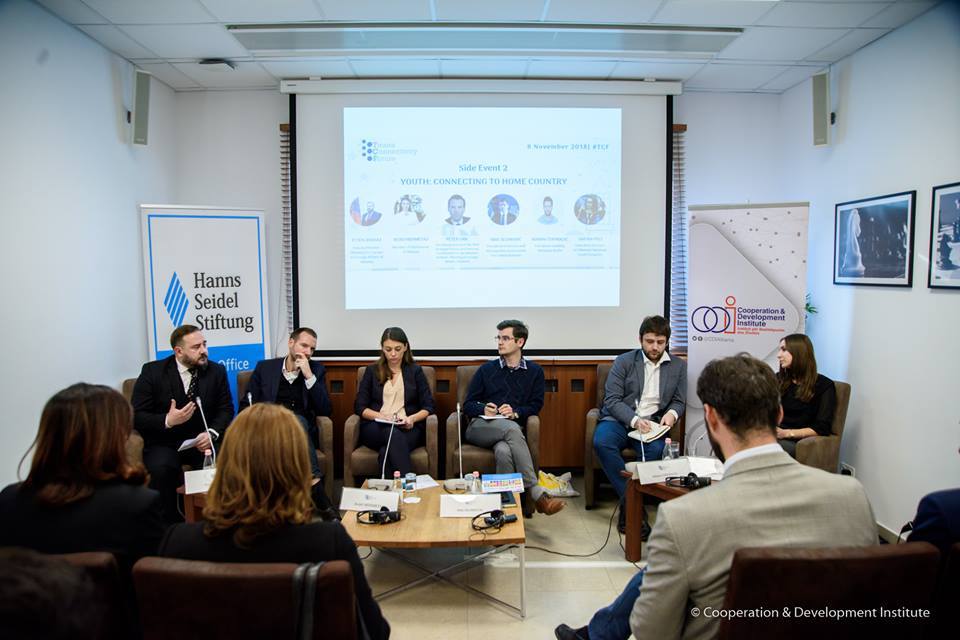 The 4th Tirana Connectivity Forum this year took place in Tirana, Albania under a new format and name to continue the tradition of the annual Conference in ‘Berlin Process Series’, organized by Cooperation and Development Institute – CDI and supported by Konrad Adenauer Stiftung – KAS, Friedrich Ebert Stiftung – FES, and Hanns Seidel Stiftung – HSS. BSF Secretary-General Peter Grk attended the Forum and participated as a speaker at the panel on youth in the Western Balkans and Europe.

The panel “Youth: Connecting to home country” focused on the side effects of connectivity and especially on the emigration of youngsters from the Western Balkans countries. All agreed that this phenomenon is damaging the growth potential of the region and its social and economic development.

Mr. Etjen Xhafaj, Deputy Minister for Europe and Foreign Affairs in Albania stated that ‘Immigration is an issue that is larger than ever because we are having lots of competition, we have a baby boomers generation in the Western hemisphere that is aging to fast, so the void left by them is a magnet for our young generation’. He added that in Albania we have established a State Ministry for the Diaspora which offers possibilities to the potential of our country national who are living abroad. He also gave an example ‘we should not forget that the Prime Minister, the Head of the Opposition, the Mayor of Tirana, me and lots of other politicians, spent time abroad, but we all came back and we are contributing to our country and like thousands of young people that are doing the same.’

Mrs. Kejdi Mehmetaj, member of the Albanian Parliament, expressed her concern about emigration by expressing that youth is leaving from the Western Balkans and even if they are not leaving, they are planning to leave in the coming years and this fact is backed by lots of studies.  She stated that ‘they are leaving for job opportunities and better education, and they claim that the reason for this is the lack of hope. This means that they do not want to come back, as they do not have anymore faith in the decision makers. Something is going wrong to the political system and we need to fix it, and the best way to fix it is to have youngsters involved in the whole process. If we need to strengthen our democracy and to make sure that from our policies will benefit the citizens and especially the youngsters, of course the citizens and the youngsters have to be involved.’

Mr. Peter GRK, National Coordinator for the Western Balkans at the Ministry of Foreign Affairs in Slovenia, stated that ‘the narrative of the politician is important, but the narrative has to stand in facts. If you do not have basic facts to support the narrative, than nobody is going to buy it, because in these times of digitalization the truth can be revealed quite quickly and you can’t fool people for a long time, especially the youngsters.’ To the question on what EU is doing to support youngsters in the region, he answered ‘the EU can set up a framework for the Western Balkans, but if you are waiting from the European Union to do everything for the region you are mistaken. As Slovenia we are strongly promoting not only to set up the framework and to be more active supporter for youth with the mobility and digitalization projects, but at the end of the day you cannot tackle the youth issues in a vacuum, it is part of a much bigger story doing the reforms in the economic fields, in the rule of law or in the education sector, because youth is part of a comprehensive system’.

Mr. Mak Selimovic, the President of the Bosnia and Herzegovina Association for United Nations, partner of Western Balkans Youth Cooperation Platform, underlined how ‘as youngsters we need tackle some of the issues of young people all together in the region. A month ago we gathered together and signed a Joint Statement when we agreed to jointly work in some directions as youth participation in policymaking and governance, in education and youth employment issues, regional cooperation, etc.’ He continued, ‘Western Balkans Youth Cooperation Platform and us as partners and youngsters have already started with voicing up the youth issues. We do not need the Government for supporting us in working together. The Government provides the policies, but we need to step up and use and improve the available means for achieving our objectives.’

Mr. Adnan Cerimagic from European Stability Initiative stated that ‘though the trend is clear that people are leaving the region, and that they will continue to leave, the question is about those who stay and the quality of life that they have.’ Mr. Cerimagic added that ‘to achieve better life of those who stay, we need to change the way we think about public policies, their adoption and implementation. It should not be decided in a small circle of people outside of institutions. Public policies need to be based on reliable data and detailed research, and it needs to be the result of consultation with all stakeholders.’

Following the discussions with the participants on what the government is doing and what youngsters expect, the Moderator Mrs. Dafina Peci, the Executive Director of the National Youth Congress of Albania, concluded the discussion by saying ‘the discussion on youth asks for uncountable actors and it is an utopia to set all of them in one room or in one table, but when we discuss about youngsters and how to connect them to the home country, we should stop the fragmentation between youngsters and the potential/policymakers in one country and focus on how to better inter-cooperate and not to expect too much only from the other side.

This panel was organized in partnership with Hanns Seidel Foundation and Western Balkans Youth Cooperation Platform.